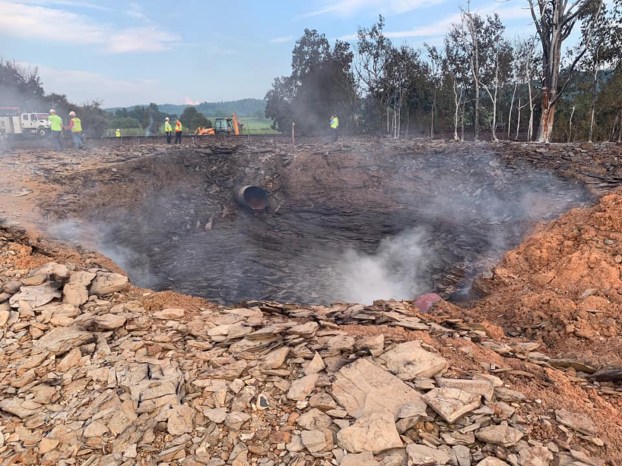 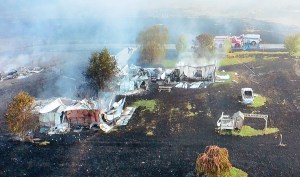 With smoldering destruction surrounding it, a play area untouched by the gas pipeline explosion sits on a small patch of green grass.

The company responsible for a Lincoln County pipeline that exploded last year, killing one person and injuring several, has been ordered to begin making immediate corrections to the pipeline.

Enbridge, Inc. has received an amended corrective action order in regards to a pipeline that exploded last year. In addition to the personal injury that resulted from the explosion, many homes in the area were also damaged or destroyed.

On Aug. 1, a section of Line 15 near the Indian Camp subdivision in northern Lincoln County erupted and released about 66 million cubic feet of natural gas and ejected about a 30-foot long section of the pipeline, which landed about 481 feet away.

The natural gas ignited and sent a plumb of fire hundreds of feet up in the sky that could be seen from miles away.

About 75 residents fled their homes as the fire scorched the neighborhood and burned about 30 acres. One woman lost her life at the scene.

The intense heat from the fire also damaged nearby railroad tracks, melted paint off of cars, and turned vinyl siding into globs of goo.

Firefighters and first responders from Lincoln, Casey and Boyle counties worked together to put out the blaze.

Pipeline and Hazardous Materials Safety Administration, Office of Pipeline Safety, initiated an investigation of the accident. The National Transportation Safety Board (NTSB) is now continuing to lead the investigation.

On April 28, the U.S. Department of Transportation Pipeline and Hazardous Materials Safety Administration sent the order for immediate additional corrective actions for Enbridge to take regarding its subsidiary’s, Texas Eastern Transmission LP Line 15, which “failed” on Aug. 1, 2019, about six miles south of the Boyle County line near Junction City, according to the letter sent by Alan K. Mayberry, associate administrator for pipeline safety.

Mayberry wrote in the order, “After evaluating the foregoing preliminary findings of fact, I find that continued operation of the affected segment without corrective measures is or would be hazardous to life, property, or the environment. In addition, having considered the uncertainties of the cause of the failure, the pressure at which gas is transported, the vintage and type of pipe, the risk of fire to the environment and populated areas in the vicinity of the affected segment, I find that a failure to issue this order expeditiously to require immediate corrective action would result in the likelihood of serious harm to life, property, or the environment.”

Mayberry wrote that Line 15 failed in late fall of 2003 near Morehead between the Danville and Owingsville compressor stations. The pipeline was manufactured by the same company and was about the same age of the one that exploded in Lincoln County last year. It was found that the failure resulted from interactions between hard spots and midwall lamination.

According to the Pipeline Safety Trust, hard spots are “local changes in hardness of the steel in the pipe resulting from nonuniform quenching procedures during the manufacture or changes in chemistry of the steel. Hard spots, when stressed, are subject to failure from mechanisms, such as hydrogen-stress cracking.”

In 2011, TETLP conducted an in-line inspection to detect hard spots in Line 15, and none were found.

The same inspection was performed on the line after the explosion in 2019 and data revealed 10 hard spots in the failed pipe joint. “Further analysis revealed the location of the Line 15 failure origin coincided with the locations of two newly discovered hard spot indications,” the amended order read.

Some of the required corrective actions for TETLP to conduct include:

Board votes to rescind nickel tax

The novel coronavirus has disrupted many lives, and due to the economic uncertainty it has caused, the Lincoln County Board... read more