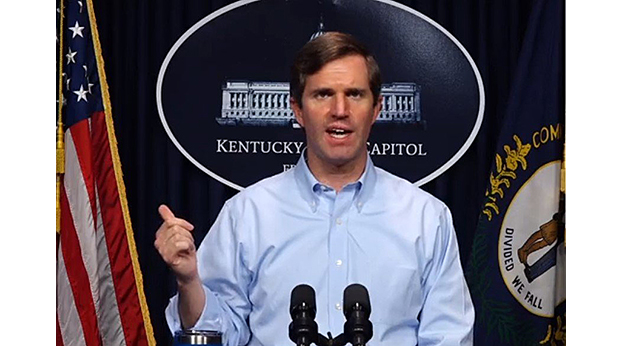 Gov. Andy Beshear said August could be a tough one related to COVID-19 deaths in Kentucky. Seven were reported Tuesday. (Kentucky Today/Tom Latek)

After seeing three days in a row with big drops in new cases of the coronavirus, Kentucky saw another spike on Tuesday.

A total of 700 new cases were reported to state health officials, bringing the total to 32,197 since the start of the pandemic, after some duplicates were removed.  Eighteen cases were from children aged five and younger, including a 2-month-old and a 6-month-old in Jefferson County.  In addition, a 1-year-old in Metcalfe County was positively diagnosed after being exposed to the coronavirus at church and who had recently traveled to Tennessee.

“We don’t like to see that climbing up,” said Gov. Andy Beshear during a Capitol press conference, “but it’s not significantly higher.  We do want to see this get closer to an overall 5%.  We are pleased, if you can be pleased in the middle of COVID, that this isn’t increasing at the rate we previously saw, where we went from 2.5 to 5.5% over a period of a few weeks.”

Officials with the Indianapolis 500 have decided to run the race Aug. 23 without spectators, but Beshear said there has not been a similar decision for the Kentucky Derby on Sept. 5.

“I talked to Bill Carstanjen, who heads Churchill Downs, earlier today,” the governor said.  “We are both carefully watching the numbers.  He assured me that he wants Churchill and the Derby to be safe, and we are going to talk early next week, after we see the trends going on.”

Beshear also addressed the deadlock in Washington over a new version of the CARES Act, where House Democrats and Senate Republicans have approved their own versions, with no agreement.

“What they pass may be the difference in us being in the midst of this recession for a long time, or us being able to bounce back,” he said.  “This round in DC has to include two things: state and local government aid and continuation of the additional $600 in unemployment.  If they change the formula, instead of just having the add-on, it will take us more than 45 days to reconfigure our system.  People will miss out on benefits, that will be a nightmare, and we are not the only state.”

You can get more information from the Beshear administration’s response to the coronavirus pandemic at kycovid19.ky.gov.

Gov. Beshear will have another press briefing Wednesday at 4 p.m. EDT.