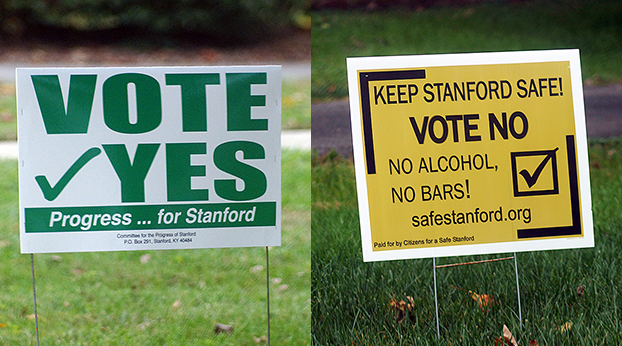 A sign on Main Street tells Stanford residents that a "yes" vote is a vote for progress, while a sign two doors down encourages them to vote against the sale of alcoholic beverages in city limits. (Abigail Whitehouse photos)

Wet or dry?
Stanford residents to decide on alcohol sales

“Are you in favor of the sale of alcoholic beverages in the City of Stanford, Kentucky?”

That is one question that Stanford residents will see on their ballot this November.

Some have already seen the question, as early voting began on Oct. 13 and will continue through Nov. 2.

Lincoln County Clerk Sonny Spoonamore said voter turnout has been steady so far during this election.

Due to the novel coronavirus, voters were given several ways to cast a ballot this year including in-person on Election Day, early voting, absentee voting by mail and voter identification.

The paper ballots consist of a front and a back page, Spoonamore said, something voters need to remember when they go to cast their ballots.

The question “Are you in favor of the sale of alcoholic beverages in the City of Stanford, Kentucky?” appears on the back page of the ballot in the bottom right corner and is the last question on the ballot.

Voters in Stanford precincts A101, A102 and A103 will be voting on the alcohol question, he said.

Over 300 signatures were turned into the Lincoln County Clerk’s Office on the petition to put the question on this year’s ballot. Several attempts to bring alcohol sales to Stanford have been started in the last two years, but none have made it to the ballot until now.

Judge-Executive Jim Adams Jr. told magistrates in March that he believes this new effort to bring alcohol sales to Stanford will have better luck than the previous attempts.

Signs have been popping up across Stanford yards, some for and some against the sale of alcohol. While one sign says “Keep Stanford Safe; Vote No; No Alcohol, No Bars!” the other sign says “Vote Yes; Progress…for Stanford.”

Property Transfers The Well, Inc., to the Commonwealth of Kentucky for the use and benefit of the Transportation Cabinet, Department... read more