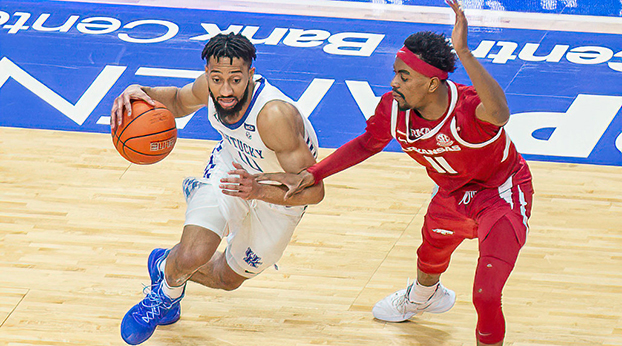 Kentucky made a breakthrough Tuesday but it wasn’t enough to end a losing streak that blossomed to four games for the second time this season.

Jalen Tate made two free throws with 4.3 seconds remaining to lift Arkansas to an 81-80 victory over the Wildcats, ending the Razorbacks’ eight-game losing streak to Kentucky.

On the ensuing possession, following Tate’s two free throws, Kentucky turned the ball over at the buzzer as the Wildcats fell for the seventh time in the past eight games.

The Wildcats have little time to salvage the season, but the performance against the Razorbacks gave Kentucky coach John Calipari some hope in the final three weeks of the regular season.

The Wildcats (5-13, 4-7 Southeastern Conference), trailed by 12 with six minutes remaining, but stormed back and even took the lead at 80-79 on a Davion Mintz 3-pointer with 12 seconds left, but Jacob Toppin was called for a foul on the rebound by Tate.

Calipari wasn’t sure if Tate was fouled on the play and held off on final judgment on the call until evaluating the game film. Kentucky guard BJ Boston was more vocal about the whistle.

“I honestly didn’t think it was a foul,” Boston said. “The refs gave them that game. That’s all I can say.”

Boston led the Wildcats with 17 points and connected on four of the team’s season-high 14 shots from long range.

Even after the Wildcats got down by double digits, Calipari wasn’t going to let his players “hang their heads.”

“I had to tell them they were down four baskets with five minutes to go,” he said. “They looked like the world ended. What? This was a break-through that way.

“Am I happy we lost? No. I want to watch the end of the game to make sure I know exactly what happened. The plays and the execution we had (down the stretch) — flawless.”

Olivier Sarr followed Boston with 13 points and drained three treys, including two crucial 3-pointers down the stretch that ignited the Wildcats’ comeback attempt.

“Coaches tell us every day just to keep fighting and fight for all 40 minutes,” Boston said. “That’s what we did today. Unfortunately, it didn’t go our way today.”

Devin Askew and Mintz chipped in with 11 points, each, followed by Keion Brooks with 10.

Tate led Arkansas with 15 points, while Moses Moody added 14 and drained fir of the team’s nine field goals from behind the arc.

Despite the loss, Boston said the setback was a learning experience.

“I feel like this is a game where we grew and learned,” he said. “We finally fought for the last five minutes of the game and we just came out ready to play from the start.”

Calipari is optimistic the performance will lead to better results in the future.

“Let’s just hope this was a little bit of a breakthrough,” he said.

In his first remarks to the media since freshman Terrence Clarke was told he would miss the next four weeks because of a leg injury, Calipari said the decision was up to the team’s medical staff.

“I’m not going to get into the specifics of what’s wrong, but he has an injury (and) he cannot play. Everybody on this team …. He cried, I cried, because he’s out another four weeks. It’s not like anybody doesn’t want to play.

“He’s supposed to be our best player, we haven’t had him and now you look at this team, I’m proud they’re fighting.”