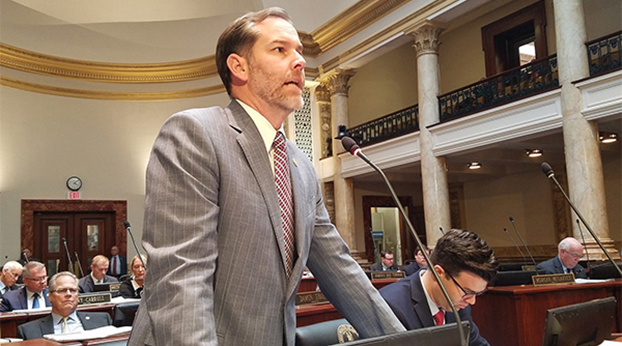 A bill to give public and private school students the opportunity for a “do-over” year passed the Kentucky Senate on Tuesday.

Sen. Max Wise, R-Campbellsville, the sponsor of the measure, said everyone knows the effect of the coronavirus pandemic on businesses and professions. “But it’s also important we talk about today the impact COVID-19 has had on our children, students across the commonwealth.”

He told his colleagues during floor debate that friends of his daughter, who was a junior at the time schools closed a year ago, would come over to the house and ask him as a legislator, “What is going to happen? Did I have any insight as to what was going to be taking place for the remainder of their senior year? I couldn’t answer any of their questions, no one could answer those questions.”

The effect on student-athletes was another consideration that caused him to file the bill.

Students in K-12 could take advantage of the do-over bill during the 2021-2022 school year. “A re-take of any course would not count as an additional credit toward graduation, unless the student fails the original course,” Wise said.

There would also be an extra year for student-athletes to compete, he said. “The KHSAA shall allow a 20-21 high school student a fifth consecutive year of eligibility at the same school, but the participation age limit of being no older than 19 years old that’s currently in place, will stay in its original place. Also, no transfer regulations are waived.”

Students and families who want to take advantage of the do-over year would have until May 1 to submit a request to the local school district. By June 1, school boards would accept all or none of the applications. By June 16, the districts would have to submit their plans for waivers to the Kentucky Department of Education.

Sen. Rick Girdler, R-Somerset said he supports the bill. “I have a granddaughter who is a fourth grader. She is one of those who has to have a structured setting and be in the classroom, which is the only time she grasps it all. This will give her the opportunity to do the fourth grade over.”

The bill passed 36-0 and now heads to the House.