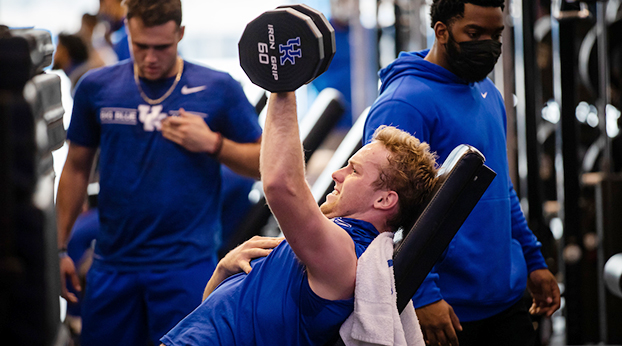 Balance is key for UK’s offense

Balance is the goal for Kentucky’s offense with new offensive coordinator Liam Coen. He understands how well Kentucky has run the football in recent years and returns a potential star running back in Chris Rodriguez and All-American tackle in Darian Kinnard. He also knows Kentucky needs to add some sparkle to the offense by being able to stretch the field with a passing attack.

“Balance is the key word. They have done a phenomenal job of running the ball here and we need to continue to do that and be physical up front,” Coen, who left the Los Angeles Rams to join Mark Stoops’ staff, said. “Now how do we marry the run, pass, play-action and all that stuff and give the quarterbacks and receivers high-level completions and explosive plays. Our offense will be more similar to what the Rams did. We are not just going to drop back and pass all the time.”

One change he’s trying to implement is putting quarterbacks under center rather than aways in the shotgun. The problem is Beau Allen and Joey Gatewood, the top two quarterbacks going into spring practice, cannot really remember the last time they took a snap under center.

“We are going to try it and see where we go. If they can not handle it I am not going to try and fit a square peg into a round hole but there are a lot of things I like to do that come from under center,” Coen said.

Allen, the redshirt freshman from Lexington, says being under center allows his “feet to be quicker” and that has made him feel faster and more agile during offseason workouts. He also says the view from under center as opposed to being in the shotgun formation is not that different.

“You can still look around and see what you have to do. It’s pretty similar. You are just a little closer to the line of scrimmage,” Allen said.

“I feel good with it. I am getting more confident with it every day,” Gatewood said.

Gatewood, who transferred to UK from Auburn and played sparingly last year, is learning to appreciate what Coen is teaching him even though this is his third offensive coordinator and third offensive system in three years in college. He says seeing what Coen sees from his perspective is “eye-opening” to him.

“He sees things I didn’t see at first,” Gatewood said. “I like his way. I keep gaining knowledge from his game that I can implement in my game. I know all our guys are really excited for this opportunity with him.”

Coen tries to appreciate and understand what his quarterbacks are seeing and feeling.

“A lot of things go into playing that position that most people do not see. It’s not an excuse but the reality is there’s just a lot to playing the position,” Coen said.

Coen grew up in a “football house” in Rhode Island where his father was a Division III college football coach. He threw for over 5,000 yards and 66 touchdowns in high school.

If Coen was not at a football game, he was watching football on TV or film. His father had films and books on successful offenses, including the spread offense run by former UK coaches Hal Mumme and Mike Leach. Quarterback Tim Couch was on some of those films during the “Air Raid” era at UK.

“Tim Couch, I will do anything to get one of him. One might be here hopefully,” Coen laughed and said. “He was so special to watch and it was so much fun to watch him play. Heck, I wanted to be Tim Couch when I played. Tim reached out to me when I got the job.”

Coen is always the quarterbacks coach as well as the offensive coordinator. That means Allen, Gatewood, and the other quarterbacks spend a lot of time with Coen daily.

“I think it just creates a stronger bond and is really a big strength,” Gatewood said. “I am just excited to work with him and expand my game. Just hearing him teach and explain it is different. I get to work with him every day. I get to pick his brain every day and absorb everything. It is go time.”

If Stoops is right, the early coaching is paying off. He praised the “accuracy” of the quarterbacks after UK’s third spring practice last week.

“They know where to go with the football. Our completion percentage is very high, very few drops, very few balls on the ground,” Stoops said. “I am very pleased with what I am seeing offensively.”

Stoops is spending time just like the offensive players learning Coen’s system after having Eddie Gran as his offensive coordinator the last five years.

“It’s exciting for me to learn the system and see what they are doing, too,” Stoops said.

Allen said there is a lot to learn in Coen’s playbook and he studies it daily. However, he says while a lot of things may look different, many things are the same to the players.

“The struggle and the grind has been fun so far,” Allen said. “We are trying to marry the run game and pass game to keep defenses off balance. So even if things look different in this offense a lot of the things are going to be the same.”

Abernathy shining on the diamond for UK

LARRY VAUGHT Kentucky won its first 20 games before losing to traditional Southeastern Conference power Florida and had a 23-2... read more