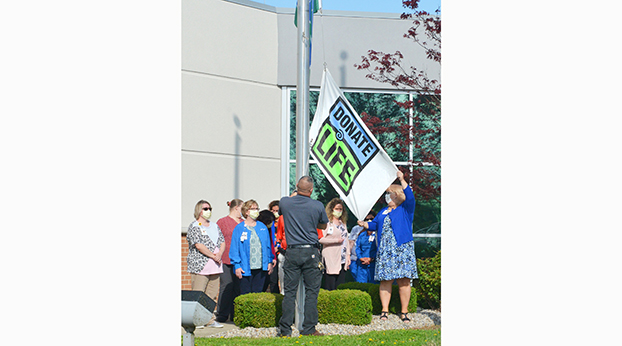 On Monday morning several employees at Ephraim McDowell Ft. Logan Hospital watch as the Donate Life flag is raised at the hospital in honor of National Donate Life Month. - Photo by Robin Hart

Playing golf, eating birthday cake with a grandchild, and even learning how to walk are just some of the special occasions that organ transplant recipients of all ages are enjoying today, thanks to the heroic and unselfish acts of others. April is National Donate Life Month, as well as Donate Life KY.

Watts Chapel Baptist Church Pastor Dan Gutenson and several members of his family know first-hand the importance of organ donations and transplants
Gutenson has polycystic kidney disease, a hereditary condition where cysts developed on his kidneys causing them to fail. His mother, brother and uncle had the same condition and were able to receive kidney transplants.

His twin sister also has the disease and the deterioration of her kidneys recently caused her to be placed on the kidney recipient list.

Gutenson is 60 now, and 11 years ago, he received a kidney transplant. And his 28-year-old daughter has been diagnosed with the same condition. She will probably be added to the recipient list later in her life, when the disease progresses.

Gutenson said Donate Life KY “has been and will be hugely important” in their lives. And it’s just as important to other families on the waiting list across the commonwealth and the country.

Even a couple of members of his Crab Orchard church have had organ transplants — a liver and a heart, he said.

Gutenson said he’s talked at several local health fairs trying to educate the public about the importance of the organ donor registry.

And for the fourth year in a row, he’s hosting the Second Chance @ Life Golf Fund Raiser at the Dix River Country Club in Stanford on Saturday, April 24. He said all the proceeds will go toward Team KY for the 4th Annual Transplant Games of America.

He said the Transplant Games are a way for organ recipients to compete. “I am so excited. It’s a great way to compete again,” he said.

Not all transplant organs come from a person who has died, Gutenson said. In fact, only about three out of every 1,000 deaths are in a way where the organs can be sustained and transplanted into another person. And there are about 19 people who die every day who are waiting on the transplant recipient list, he said.

The kidney he received actually came from a member of his church, Donna Harris, who happened to be a match. She wanted to donate her kidney to him. “She said ‘God wants me to do this,’” Gutenson said. “And 11 years later, we’re doing well.”

He had a friend who recently died and was on the donor list. However, doctors were not able to use the organs. But his friend helped many other patients by donating skin, corneas, ligaments, bones, and a heart valve. He gave the gift of quality of life to other people, Gutenson said.

The money goes toward the Trust for Life’s organ donation awareness endeavors through commercials, billboards, and pamphlets.

“Our county is very good with their donations,” Reed said, which places Lincoln County in the top 50% of the state in money raised for the program.

She added that as of the end of March this year, a total of 11,210 Lincoln residents are on the organ donor registry.

According to the Donate Life news release, to help illustrate the message of donation, Donate Life America creates unique artwork for each National Donate Life Month.

The 2021 National Donate Life Month art was inspired by the springtime scene of a garden.

A garden and the insects within it serve as symbols of hope, courage, and transformed life — themes repeatedly found within the donation and transplantation journey.

April is a time to focus Lincoln County’s attention on every individual’s power to make life possible by registering his or her decision to be a potential organ and tissue donor, Reed said.

“Just as each of us takes care of our own garden, registering as an organ donor produces hope within our own community,” she added said.

In recognition of April being National Donate Life Month and Donate Life KY, Ephraim McDowell Fort Logan Hospital hosted a flag-raising event on Monday, along with other organizations across the state precisely at 10:08 a.m. and a moment of silence was held for 1 minute and 8 seconds. The significance of the numbers represented one organ donor can save eight lives, and about 108,000 people are currently on the national organ registry.

You may join the Kentucky Organ Donor Registry in one of the following ways:
• Online 24/7 at RegisterMe.org
• On your Apple iPhone, go to your Health App and toggle to “organ donor.”
• Driver’s License Renewals: All Circuit Clerks’ offices and all KYTC offices have re-opened, adhering to Governor Beshear’s COVID-19 guidelines, and continue to do so.

Protecting our waterways and saving our streambanks

By Lindsie Nicholas and David McGrade, Bluegrass Greensource At this point in winter, a longing for spring and the outdoors... read more