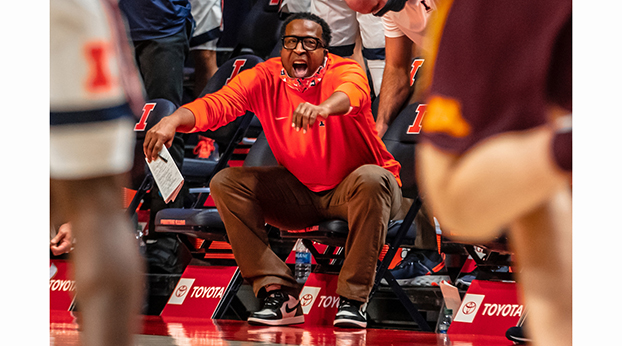 Calipari and Coleman were not strangers

John Calipari was not a stranger to Ronald “Chin” Coleman before Coleman left Illinois to join the Kentucky coaching staff recently. Or at least Coleman knew about Calipari even if Calipari might not have remembered their first meeting when Coleman was head coach at Whitney Young High School in Chicago.

“We were a top-10 program in the country. I’m sure you have heard of Whitney Young and all the great players that have played there, and I coached there. When I was a high school coach, Coach Cal was at Memphis,” Coleman said.

“He may not even remember this, but I came up to Memphis and I studied Coach Cal for a week. Coach (Orlando) Antigua remembered that. I was there for a week just studying the dribble-drive offense at the time. That’s what I do: I’m a forever student of the game. I study like crazy.”

Coleman said he visited every coach/college he could to try to learn something from everyone.

“If I can take a page out of this book, his book, that book, put it with my pages, now I’ve got a really, really, really good read. I’ve got a great book. I did that as a high school coach, and that was kind of like my first introduction to Coach Cal and it was from an admiration standpoint in what he was doing in the offense and obviously the success,” Coleman said.

Coleman obviously followed Calipari’s career success and when Coleman started his college coaching career he sometimes would find himself in the same gyms in Chicago and other places as Calipari.

“We’ve known of each other for a while, but I never, ever, ever dreamt or thought that I would have the opportunity to work for him, and that’s why when that opportunity came, it was like a sweet deal, man,” Coleman said.

“It was just so sweet to say that I was coming to coach at Kentucky.”