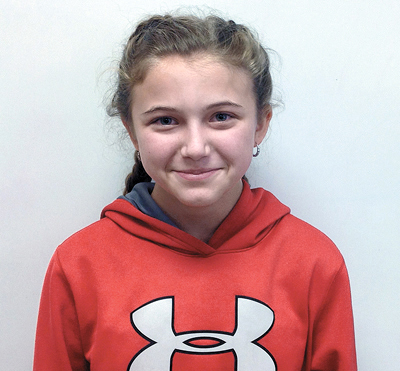 Crab Orchard Elementary student Keelee Baker was one of several to participate in a writing contest hosted by the AARP recently but she was the only one to come away as the school winner.
Students were asked to write on the topic of “Why your grandparents should win the AARP Grandparent of the Year Award.” See Baker’s winning entry below:

Dear AARP,
Who is the one that served in Vietnam to save you? My papaw did. He went to school and worked on a farm. This is some stuff about my papaw, Donald Dowell is his name. That isn’t all, there’s more and this is why my papaw should get the grandparent of the year award.
Okay, my papaw was in Vietnam he said “It was a big change in my life going to war. I was country boys that do much, but work on the farm.” He was 19 years old when he went to war. He didn’t want to go but he was drafted. So he did his job. I asked him ‘’ How did make you feel going to war?” he said “I was young and scared.” So that’s Vietnam for my papaw.
When my papaw went to school he didn’t like it much. When he got home from school he did his homework and farm work right before he went to bed. He told me he didn’t get much home work. He also said “school helped me to get a good education and a job.” Also he was the only kid to graduate from high school out of 7 kids.
Also when he was in Vietnam he was a chauffeur. He drove his team in the war and he drove generals. He was on the Bobs Hope Show in 1968! During the show he drove Miss Kentucky and Miss Louisiana. If you are thinking what is the Bob Hope Show is? It is a show for the veterans.
“Was there a time that you helped someone?” I asked him. He said “Yes, I had a friend that lived in London Kentucky. It was snowing a lot. My friend needed some money and food. So I drove to London Kentucky in a big snowstorm, to give him some money and food. But your Nanny and I made it back safely.”
The one event that stands out the most for my papaw is when he saw my Nanny. When he went on the first date with her, he said “man I love her!”  Then they only dated six months before they got married. Another great event my papaw said was when my mother was born.
So, the one who cooks for me, the one that takes me places, and served for us is my papaw. I know he should win the Best Grandparent Award because he is the best there will ever be!
Love,
Keelee Baker

Off to the farm – Bear Wallow Farm