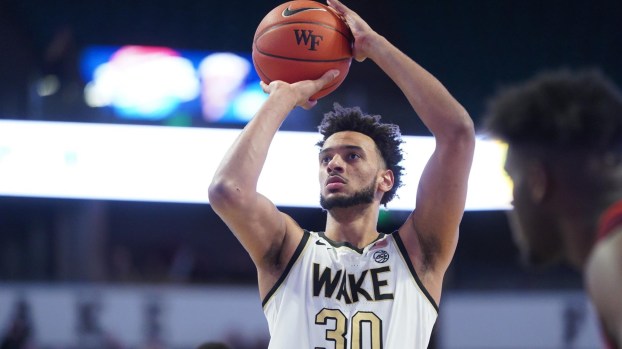 Olivier Sarr averaged almost a double-double at Wake Forest last season and will give UK a needed big for next season if he is ruled eligible by the NCAA. (Wake Forest Photo)

Former college basketball coach and current ESPN analyst Seth Greenberg loved what Nate Sestina did for Kentucky last season and thought he was “terrific” for the Cats on the court and in the locker room.

However, Greenberg believes if UK can get Wake Forest transfer Olivier Sarr eligible next season he’ll bring a whole different level of help than Sestina did after his transfer from Bucknell.

“Sarr has chance to be a really good piece for them because of the players they will have around him,” said Greenberg. “His style of play, skill level really fits. He’s active, does a nice job rebounding and has a very high basketball IQ.

“I loved what I thought (Purdue transfer Matt) Haarms would have added because of his defensive intensity if he had picked Kentucky but he was not as skilled offensively as Sarr. This could be really good for them. With the size of their wings and backcourt adding a skilled front court player like him who can move his feet, has experience at the highest level and has been productive is really big.

“This guy has proven himself in the ACC. Wake Forest did not win a ton of games last year but he played at a pretty high level for a long time and just seems like a really good get for Kentucky with his skill, size and athleticism not to mention his experience and versatility.”

Greenberg doesn’t like to compare players but says Sarr will have more offensive skills than some centers Calipari has had at UK and certainly was needed on a roster that lacked a true center.

“He can pass it. He can rebound and his rebounds per minutes are really good. He can contest shots,” Greenberg said. “He’s not a 3-point shooter but he won’t need to be. He can finish at the rim and get to the (foul line). Wake Forest was guard oriented but his shot selection is good and he has a good feel for how to score.

“He can score around the basket, score off the baseline, play off the elbow some, things John wants his center to do. You are not going to get a ton of shots at Kentucky but he will be able to take advantage of the shots he does get.”

The ESPN analyst says the level of competition Sarr has faced makes him even more valuable to UK.

“When you play in that league (ACC) there are no rocking chair games (to take it easy). You have got to be ready to play every night. Every game is big and that will serve him well at Kentucky because every game Kentucky plays is big for the opponent. Expectations at Kentucky are so crazy for everything but he’s used to being in the big-game atmosphere.”

Greenberg hopes the NCAA gives Sarr a waiver to play after Wake Forest waited until late April to fire coach Danny Manning knowing Sarr would not have time then to enter the NBA draft. It’s not a given he will get a waiver but Greenberg thinks it is the right thing to do.

Greenberg was a head coach for 22 years and remembers when he was fired by Virginia Tech in late April of 2012.

“When you are let go in late April, it impacts so many things,” Greenberg said. “A coach can’t go get another job. It’s impactful to players.

“They (Wake Forest) basically handcuffed that kid so he wouldn’t put his name in the draft. That’s just wrong. How do you wait until the end of April to fire him when the season ended in early March? It took that long to make this decision. Come on. That is just wrong.”

At least three other ESPN personalities — Jay Bilas, Dick Vitale and Paul Biancardi — have all indicated they think the NCAA should allow Sarr to play next year at UK. Greenberg believes new Wake Forest coach Steve Forbes, who tried to keep Sarr, will be supportive of the transfer because he told Greenberg he hoped Sarr gets to play.