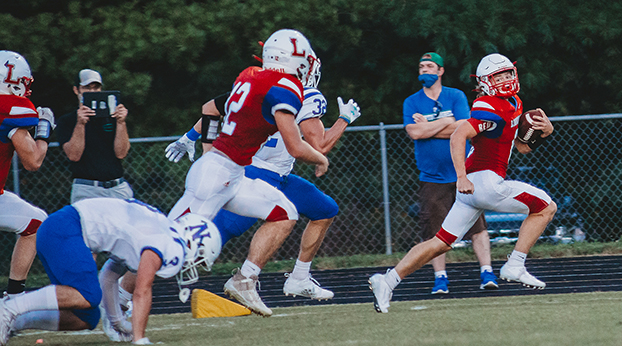 Clayton Davis is off to the races for one of his four rushing touchdowns and 203 rushing yards on the night. (Megan Renner photo) 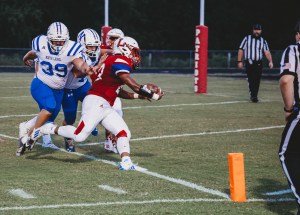 Rodney Alcorn makes his way into the end zone for a touchdown en route to an 87-yard rushing night for the Patriots. (Megan Renner photo)

Lincoln County got off to a great start in its opening game of the 2020 season Friday, knocking off North Laurel, 50-26.

It was the Clayton Davis show for much of the night, as the junior was an offensive juggernaut. He rushed for 203 yards and four touchdowns on 12 carries, and also was a perfect 4 for 4 in passing for 80 yards.

Rodney Alcorn toted the rock 19 times for 87 yards and a touchdown, and Lee Amon also scored a touchdown, picking up 50 yards on 11 carries. Amon also had 74 receiving yards on two catches.

Davis was also tied for the lead in tackles on the night with eight, along with Robert Bowman who had eight of his own. Blaise Brown, Cody Miracle, and Seth Horton each had four tackles.

Amon and Ross Gibson each picked off a pass for the Patriots, and Amon took his to the house for 47-yard touchdown.