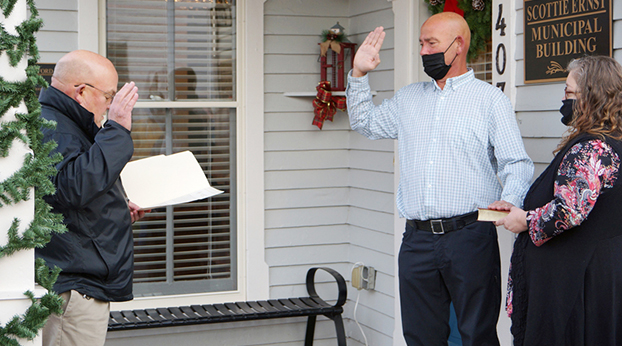 After the unexpected death of Stanford Mayor Scottie Ernst, voters were left to choose a new leader for the city this November and Stanford residents chose Dalton Miller.

Miller was officially sworn into office by Lincoln County Judge-Executive Jim Adams on Monday, Nov. 23 and will serve the remainder of Ernst’s term, which ends in 2022.

Miller handily beat his two opponents, Peggy Hester and Jamie Leigh, and was eager to get to work as soon as the results came back.

“I feel great,” Miller said on election night. “My goals have not changed; I want to continue on the path that Mayor Ernst was on and I want to see his goals to the end.”

That’s why he ran for mayor, he said.

“I just want to thank everybody because it’s an amazing feeling to know that I’m going to be able to continue Scottie’s (Ernst) legacy to the end of his term,” he said. 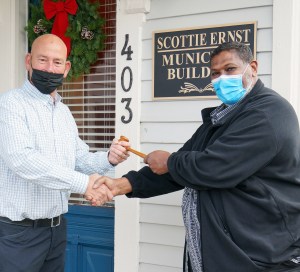 Interim mayor Jerry Wilkinson, who has served as Stanford’s mayor for the last few months, was on hand Monday to officially pass the gavel to Miller.

Miller thanked Wilkinson for all of his help.

“I truly believe he is a God-send; at a time when the city needed to heal, God led me to Jerry and Jerry accepted…” Miller said. “He allowed his city the healing it needed at the time it needed it; Jerry, thank you.”

Miller told the crowd gathered outside of city hall that he was excited to continue working to bring opportunity to Stanford.

“I just want to thank God for the opportunity to serve the citizens of Stanford and I feel humbled to be in this position,” Miller said.

The newly elected mayor said he wants to continue to progress the city of Stanford so that his children and his children’s children don’t have to leave town to find employment and opportunity.

“I just hope and pray that I continue to progress this city to where my grandbabies can stay here in this community; they can grow up here; they can be productive members of Lincoln County; work here and raise their children here…,” he said.

BY ROBIN HART robin.hart@bluegrassnewsmedia.com Kentucky Utilities customers will see an increase in their monthly bills by more than 10.5% in... read more