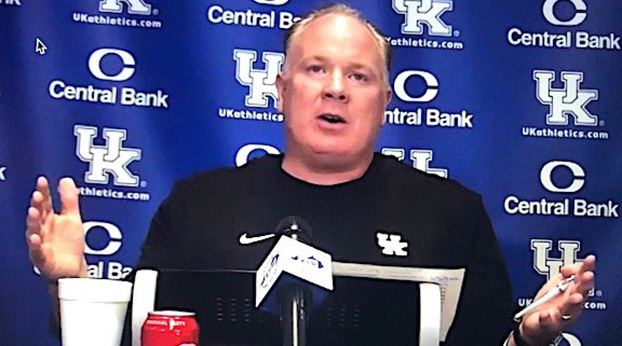 Mark Stoops talks to reporters during a zoom press conference Monday. The Wildcats will take on N.C. State in the TaxSlayer Gator Bowl Saturday in Jacksonville. - Photo by Keith Taylor

Stoops has no regrets as Cats prep for TaxSlayer Gator Bowl

Mark Stoops isn’t second-guessing his team’s decision to compete in the postseason this year.

“For the program, coaches, for all of us, it’s easy to want to do those things and talk about many years later,” Stoops said Monday. “I would not do that at the expense of our players’ mental health. I wouldn’t do it. I absolutely was not going to influence them to do this and to play this game. … I’m glad we’re going and I think it’s the right decision.”

Stoops added he feels good about competing in the postseason because “that’s how they feel.” However, he said the schedule will be much different this year compared to the past four bowl contests, considering the Wildcats won’t leave for Jacksonville until later this week.

“It’s not a normal bowl experience,” Stoops said. “It’s an away game. For people to think it’s a lot of fun, it’s not. It’s a grind and it’s work. It’s going back and forth from home and cutting into their break at a time when they’ve been mentally challenged. I’m excited because the team is excited. It’s been a good experience so far and I’m happy for them.”

Despite the circumstances with the ongoing pandemic, Stoops had a good indication early on how his team wanted to proceed following the regular season.

“(The season) was a challenge and they were spent,” Stoops said. “I was pleased with the result of the vote and I was happy that they had a chance to get away, refresh, and recharge. They know I am going to try to take care of them and try to make it an extremely positive experience for them any way I can.”

The Wildcats (4-6) returned to practice Monday and began preparing for Saturday’s TaxSlayer Gator Bowl against N.C. State in Jacksonville. Stoops expects his squad to be a full capacity when Kentucky leaves for Jacksonville later this week.

Stoops said 157 COVID-19 tests were conducted when the team arrived back on campus Sunday and “we’re 100 percent clear at this point.”

“Let’s hope it stays that way,” said Stoops, whose team will take another segment of tests on Wednesday before departing for the bowl contest. “We are anxious to get back out there (and practice).”

Like the rest of his team, Stoops enjoyed time away from football during the Christmas break and said “it’s very rare” to be strictly with his family during the holidays.

“It was really good and much needed,” Stoops said. “It was a good break and I really needed to spend some time with the family and the kids and that was really good. We enjoyed ourselves and relaxed like most people.”

Keith Taylor is sports editor for Kentucky Today. Reach him at keith.taylor@kentuckytoday.com or twitter @keithtaylor21