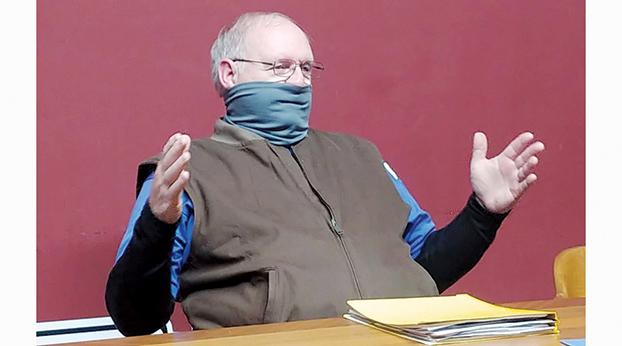 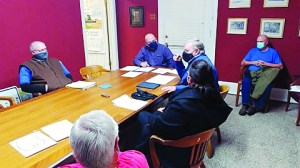 After numerous phone calls and complaints about recent address changes issued by Bluegrass 911, the Lincoln County Fiscal Court voted to recall and postpone the project until further notice.

The fiscal court, except for magistrates Joe Stanley and Jeff Ruckel who were not present, held a lengthy discussion on the issue last Tuesday during a special-called meeting.

In December, about 2,900 Lincoln County residents received notice that their addresses or road names would be changing beginning Feb. 1. Since then, magistrates and Judge-Executive Jim Adams have received numerous phone calls and complaints.

Bluegrass 911 Central Communications Director Russ Clark attended the meeting and explained the two-year long project that he and his team have been working on, with the hopes of improving the county’s overall addressing and making it easier for emergency services to respond to those in their time of need.

Clark provided magistrates with documentation explaining the background of the project, and why he believes it’s necessary.

According to Clark, the project began with the Lincoln County Fiscal Court approving the adoption of the National Emergency Number Association (NENA) standards for addressing.

“This change was necessary to give each location a unique address to aid in local law enforcement, fire and EMS agencies to locate a location in time of an emergency,” the letter states. “In doing this road names needed to be unique to easily identify them rather than using a highway number, that could be taken away if the state were to stop maintaining the road and give it back to the county to maintain.”

“We don’t have that uniformity in the county at all,” Adams said.

According to Clark’s letter, the postal service would deliver mail to the new location with an old address for up to a year, driver’s licenses could be changed for free and deeds would not have to be changed until a property is sold. If a property is sold, Bluegrass 911 would issue a letter to the new mortgage company explaining the new address.

“We’ve had quite a bit of push back,” Adams said last week.

Adams said Bluegrass 911 took the brunt of the phone calls but eventually the calls started going to the Lincoln County Fiscal Court.

“At some point, there’s going to be a mandate for us to do some address changing, to make things uniform. I don’t know when that’s going to happen…” Adams said.

Emergency Management Director Donnie Gilliam also provided magistrates with a nearly four-page long list of roads in the county that have similar names and cause confusion for emergency services.

Well, they’re all going to get you to the same place, so that’s a good thing, but that’s not true in every case.”
“Here’s my opinion, as Emergency Management Director…I believe the notification should’ve included an explanation as to why these changes are necessary. We all know that safety of the citizens is priority number one for first responders…but we can’t assume that the citizens know that too,” Gilliam said. “Communication with the public is critical to acceptance.”

Clark said addressing is an ever-evolving issue as technology continues to evolve.

“When I was growing up we lived on Rural Route 2. Then we got a different mail carrier and moved to Rural Route 3. Then we went to Rural Route 3 box ‘so and so’ and then we got an actual house number; so it’s progressed and this is trying to get down to when somebody needs help, we can find them,” Clark said. “That’s the bottom line. It’s not to make people mad; it’s not to change addresses just because we can. It’s to find people in their time of need.”

Magistrate David Faulkner asked for examples of loss of life or property due to address issues.

“I can tell you one that we’ve had in the last two weeks; we got a cell phone call that has the same street name as one in Lancaster and the guy didn’t know where he was at. He did not know which county he was in and he kept saying ‘I’m on this street, there’s a house on fire,’” Clark said. “We sent the fire department to that street (in Lancaster) – he was in Burgin.”

Adams said the multiple “loops” on Ky. Hwy. 1247 will have to be addressed.

“They have got to be fixed because that area keeps growing and there’s seven loops between Stanford and Eubank,” Adams said. “And I do think that we’re going to have to look at some uniformity on even and odd.”

Citizens comment
There were two Lincoln County residents who attended the special-called meeting to share their opinions on the address changes.

Karin Tucker, who owns a farm in Lincoln County, said she knew nothing about the changes until she received a letter in the mail.

“For us, this is a big deal. It’s not just banking, but we’re an LLC, and we’re going to accrue a lot of charges,” Tucker said.

As someone working in healthcare, Tucker said she respects the reasoning behind the changes but she doesn’t think right now is a good time to put an extra burden on the public.

“It’s pretty hard times for a lot of people right now,” she said.

Tucker said she spoke to her neighbors on Ky Hwy 1273 and many people had thrown the address change letter out, thinking it was solicitation mail.

“Honestly, I don’t know who made it, but I think if you guys would do the font and make this look a little bit more professional and not like somebody in high school wrote it, it would’ve caught somebody’s eye,” she said. “They pulled it out of their trash and fire bins.”

Jason Griffitts, who also attended the meeting to voice some concerns, said it was also confusing because the letters were mailed from Garrard County.

Bluegrass 911 is a partnership between both Lincoln and Garrard Counties.

“Why would we get something for Lincoln County from Lancaster?” Griffitts said.

There was an element of confusion, Griffitts said, as some people on his road received a letter while others didn’t.

Magistrates weigh in
Magistrates David Faulkner and Lonnie Pruitt both agreed that the roll out of the project could have been better.

“We as a government entity handled this poorly, in my opinion,” Faulkner said.

Clark said the reason for the Feb. 1 deadline was because the grant, which funded the project, had to be finalized by Jan. 31.

“If, in fact, that’s required to be repaid that’s something I think the Lincoln County Fiscal Court is willing to pay,” Faulkner said. “I’m not willing to let this thing go just like it is.”

No residents in Stanford, which is Faulkner’s district, received a notice of an address change, but Faulkner said he received numerous phone calls and texts.

“I think we as a government entity have handled this in the wrong way, and that’s just my opinion. I don’t think we can allow it to go forward without really studying what needs to be done,” Faulkner said.

Stanley and Ruckel were not present but Adams said both magistrates were in favor of ceasing the project.

“That’s a two-way question; what’s it not going to change?” Faulkner asked.

“Roads are still going to be mis-addressed,” Day said. “That’s not going to change.”

“I’ve already changed mine in Crab Orchard. I really didn’t like it as a person; I had to change my home, my rental house, my store,” he said. “But I grew up not having 911. I grew up having to remember phone numbers. I’m thankful that we’ve got

Russ and them and I know they’ve got a problem with some areas. The only thing I think we need to do…we need to put a hold on sending the other ones out and work with all these people that sees there’s a problem with it.”

Pruitt said he’s received calls from the Post Office, too.

“I just think we need to work out some of the issues and find out why people are so dissatisfied with it,” he said. “I think there’s been a lot of effort put into this.”

Vote to postpone
Faulkner made a motion to rescind the original vote to change addresses and further study the issues.
“…With the understanding that we’re not denying we have issues we have to address, but we will address them in the immediate future,” Faulkner said.

“We’re going to have to address this situation sooner or later and I’d like to see us explain to the public more…” Pruitt said.

Day asked how the county would address those who have already complied with the address changes.

“If we vote to do this I’m immediately going to call the Post Office and tell them that they can tell the general public that we’re on hold and that they do not have a Feb. 1 deadline,” Adams said. “…If the grant is recalled, the monies are recalled, and we’re going to be responsible for that and that’s going to be about $20,000.”

Faulkner’s motion died for lack of a second.

“I don’t want to kick what we’ve already done. It’s going to cost us one way or another and we know we’re going to change it,” Pruitt said. “I think the majority of people I’ve talked to on my side can probably be worked out with; I’ve not had anybody say they just didn’t want to do it, they just wanted to make it better.”

Clark said rather than rescinding the whole thing, it would be better to postpone it with a future date in mind of getting it done. “So we don’t have to pay the grant back,” he said.

Pruitt made a motion to postpone the changes until further notice and to better inform the public of the changes when the time comes.

The Lincoln County Fiscal Court voted 2 to 1 to halt the current 2,900 address changes and postpone the rest of the project until further notice. Adams and Pruitt voted yes while Faulkner voted no.

Ally Echols with her husband, Tom, before he was deployed. He was killed in Iraq in 2006. By Larry Vaught... read more