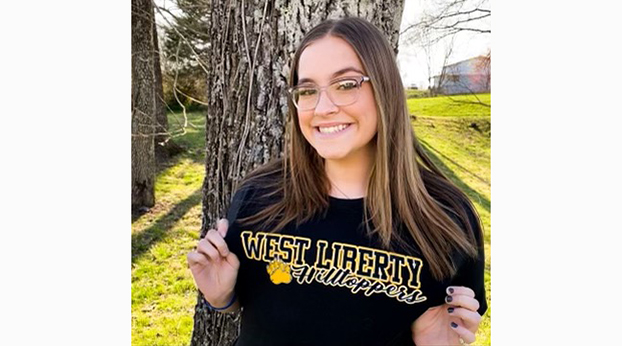 Johnson has thrown shot and disc for the LCHS team for the past four years. She holds the girls’ school record for discus at 89.2 feet, and went to state for discus her sophomore year.

Johnson said she would like to thank coaches Jose Pope, Missy Slone, and Don Harris for believing in her, pushing her, and never letting her quit.

“Without their support, this upcoming season and opportunities would not be possible. I am looking forward to my senior season, with my teammates, and making memories and possibly breaking more records,” she said.

“I can’t wait to have Suzan as part of the team. She’s going to be a great fit to our young core of throwers, and she’s going to help us continue to make an impact as one of the strongest throwing groups in the Mountain East Conference,” said coach Dominique Hudson of West Liberty University.

West Liberty University is a four-year public university steeped in a rich heritage as West Virginia’s oldest institution of higher education. Established as West Liberty Academy in 1837 (26 years before the state was admitted to the Union), it was created to respond to the need for higher educational opportunities west of the Appalachian ridge. The institution is named for the town in which it is located. West Liberty was so named in the late 18th century as the westernmost point of the new liberty provided through the Declaration of Independence.

Cats must win four to get to NCAA tourney; Face Mississippi State Thursday at noon

By Larry Vaught Vaught’s Views Can Kentucky do something it has not done since 1952 and win four straight games... read more