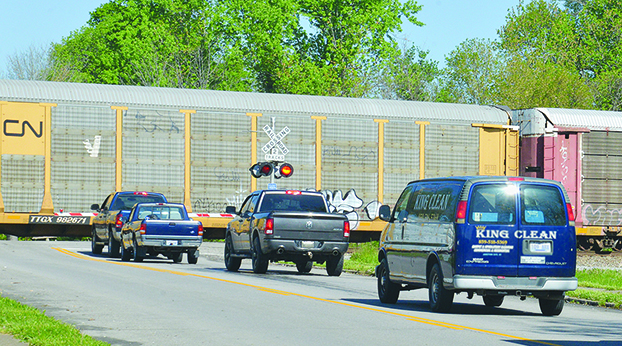 Several Lincoln County families are feeling trapped by trains that pass their homes, especially when the trains stop for hours at a time.

Lincoln County Sheriff Curt Folger said county residents have learned to deal with waiting for trains to pass several crossings throughout the Moreland, McKinney, and Geneva areas for years. “But it’s going to get worse. The trains are getting longer.”

Folger said he’s been told that trains will get up to 14,000 feet long “or some ungodly number.” This will make trains about 2.6 miles long. And when it stops for refueling or repairs in and around Danville and Lincoln County, a train that long can block at least two road crossings at a time.

And the five families who live on Geneva-McKinney Road behind the tracks who have to use a private crossing are suffering the worst, Folger said.

More and more often the trains not only pass their homes, they even stop and block their crossing, Folger said, which is up to three to four hours at a time.

What would happen if someone got sick and needed emergency medical treatment and the ambulance couldn’t reach them, he asked.

He’s even told officials with the Norfolk Southern Railroad, which travels along the tracks “they could possibly be liable if something was to happen ….”

He said he gets no response from the railroad. “They don’t even care,” Folger said.

He said railroad workers are supposed to unhook cars and move them off the crossings if they’re going to be there a while, but they don’t.

He said sometimes the railroad officials say an engine is broken down “or some excuse.”

He said he’s called the railroad’s dispatch phone number on several occasions trying to get them to unblock the crossing. He’s even tracked down the engineers and asked them to move the trains.

“I’ve tried multiple times to get this fixed, to no avail,” over the course of his 15 years as sheriff.

“They’re supposed to unhook the cars to let people into their residences.”

Folger added, “It comes to my mind that they don’t care about anybody but themselves.”

Connie McCammon is one of the residents who gets blocked from coming or going to her home for hours at a time.

She and her husband have lived there for at least 45 years and are accustomed to watching trains pass by, and sometimes waiting a little bit before they can leave their home to go to the store or to work.

But for about the past year, the train cars stretch out further which takes longer to pass, and they’re stopping for longer periods of time.

Just last week, the train blocked their crossing for about eight hours, she said. “They didn’t even attempt to break it (the cars apart) so we could get out.”

McCammon said there are five families that include nine people living behind the private crossing. She said sometimes when they’ve been trapped on either side of the train, she’s called the phone number at the crossing. “Sometimes it does some good and sometimes it doesn’t.” But recently, she’s been told that the railroad workers aren’t allowed to break the cars any more.

She said they’ve been late to work a few times and even had to miss work because of train cars parked in front of their home.

She said they’ve called the county attorney for help, but he said there’s nothing he can do because it’s a private crossing, McCammon explained.

She’s also called their state representative and sent letters to Sen. Mitch McConnell for help with the situation, but nothing has been done, McCammon said.

She said a few of the residents are not in the best of health, including her mother-in-law who’s in her 80s. “I’m worried about her. … How do we get help with 911,” she asked.

But since it seems as though the railroad won’t do anything to improve the problem, which looks like it will become worse, McCammon said, “There isn’t anything we can do. It’s one of those things we’ll have to live with.”

If a train is blocking a crossing, it takes the crew extra time to find and go to the next closest crossing.

Powell said, “It could be very detrimental to life and property in that event,” Powell said.

Representatives from Norfolk Southern Railroad were contacted but have not responded to questions regarding the issues as of press time.